“And He sent them out to proclaim the Kingdom of God and to perform healing.” – Luke 9:2

Through Bishop Ioannes (David Griffin), the work of Alpha Ωmega is supported by nearly all extant lines of Apostolic Succession. Jesus Christ consecrated perhaps seventeen of his closest inner circle of disciples as Apostles (later Greek Apostoloi). The term meant, “those who are sent forth.” Apostolic records show that from earliest times Christian churches were understood to be under the divine authority of the Apostles and their chosen successors.

The Bishop (Επισκοπος, episkopos) stood in place of the founding Apostle. By the laying on of hands he was heir to the fullness of apostolic authority, and was free to delegate special functions (healing, teaching, forgiveness of sins) to specific ministers under his jurisdiction. The term “Episcopi Vagantes” was applied to independent Successors of the Apostles and their chosen Successors who traveled as missionaries far and wide to teach the Gospel. The term Vagantes meant “traveling” or “wandering.” The Greek term Episcopos meant “Shepherd” or “Overseer.”

From earliest times valid lines of Apostolic Succession were maintained outside of the Roman jurisdiction, and to this day many churches have retained their unique traditions and theological independence. It is largely through their lines of succession that contemporary Wandering Bishops have arisen–still anathematized as heretics, but respected as possessing valid Apostolic orders.

Although they had each been taught by the Master Jesus, the Apostles had been far from uniform in thought and personality. They had many differences of opinion. Because of the great diversity of thought among the early Apostles, it was inevitable that the churches which grew out of their separate missionary journeys would differ widely. Eventually came the quest for uniformity of scripture, with the desire to record and codify ecclesiastical history. Once Constantine came to power, he convened the first ecumenical or “worldwide” council to settle matters of faith and order.

Constantine’s Council of Nicaea, in attempting to legislate Christian unity, suppressed much of the diversity and richness of the original churches, including what we today know as esoteric Christianity, as outside the mainstream of “orthodoxy” or “correct opinion.”  Many of the more sincerely religious yearned for a truer form of piety than the religion of the Empire could provide. This independence of thought erupted in a rash of so-called “heretical” movements, many of them generated in that traditional hot-bed of heretics, Asia Minor, and sweeping West to Rome. Once again the forces of history began to produce Wandering Bishops, but this time they were opposed by the Church, denounced as heretics and forced into exile. In just this way the Western and Eastern Churches were parted by the Great Schism.

In the 20th Century, all the extant lines of Apostolic Succession and tradition have been recovered through the work of legal and valid Independent Bishops. The completed synthesis of all extant apostolic lines of succession, might be detailed in the tree on page one linked below.

The first document linked to below is a diagram illustrating the synthesis of major lines of Apostolic Succession gathered by Bishop Lewis Keizer in the last Century. These lines of Apostolic Succession are delineated in detail elsewhere, including in Rt. Rev. Keizer’s excellent book, “The Wandering Bishops: Apostles of a New Spirituality,” which is introduced in abridged form above.

This is followed by a series of lineages where the documenting the apostolic lineages of Bishop Ron Capello are documented. Below are the continuations of both lines where they leave off in the documents.

Finally, before we examine various lines of apostolic succession, I would like to close with a quote from Bishop Keizer:

“The Wandering Bishops are not only heralds of an emerging new world spirituality, but custodians of the most ancient and powerful continuous spiritual lineage that still exists—the Apostolic Succession from the Great Master Jesus. This is the universal Priesthood of Melchizedek. It is not the exclusive property of Christianity, but belongs to the faithful of all nations and all religions.”

Below is a tree of the synthesis of all of the major lines of succession gathered in the last Century by Bishop Lewis Keizer. These lineages are delineated in detail elsewhere, including in Mgr. Keizer’s excellent book, “The Wandering Bishops: Apostles of a New Spirituality,” which today you can download free here. 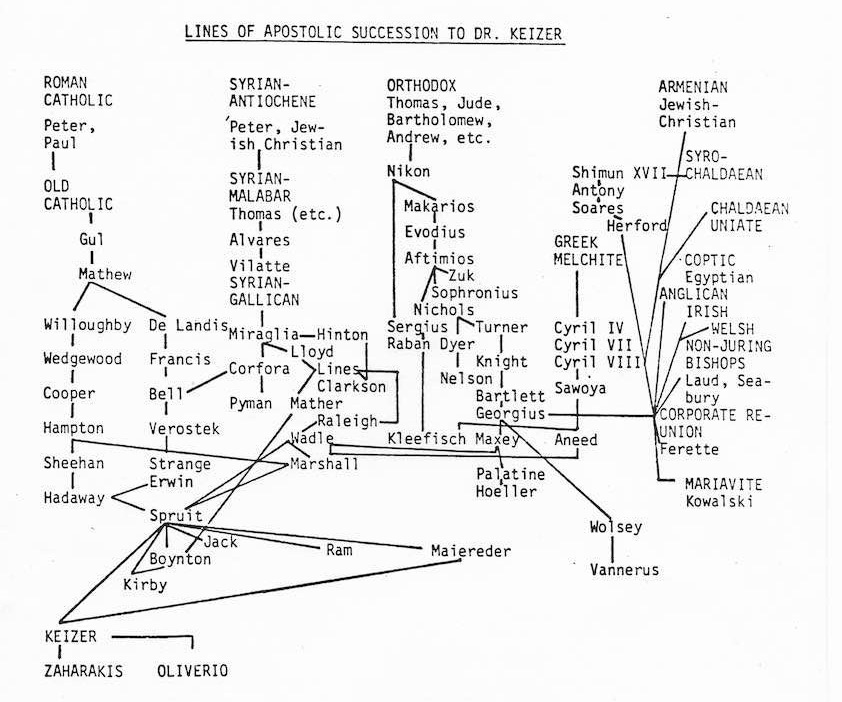